In the Studio with Shane & Shane 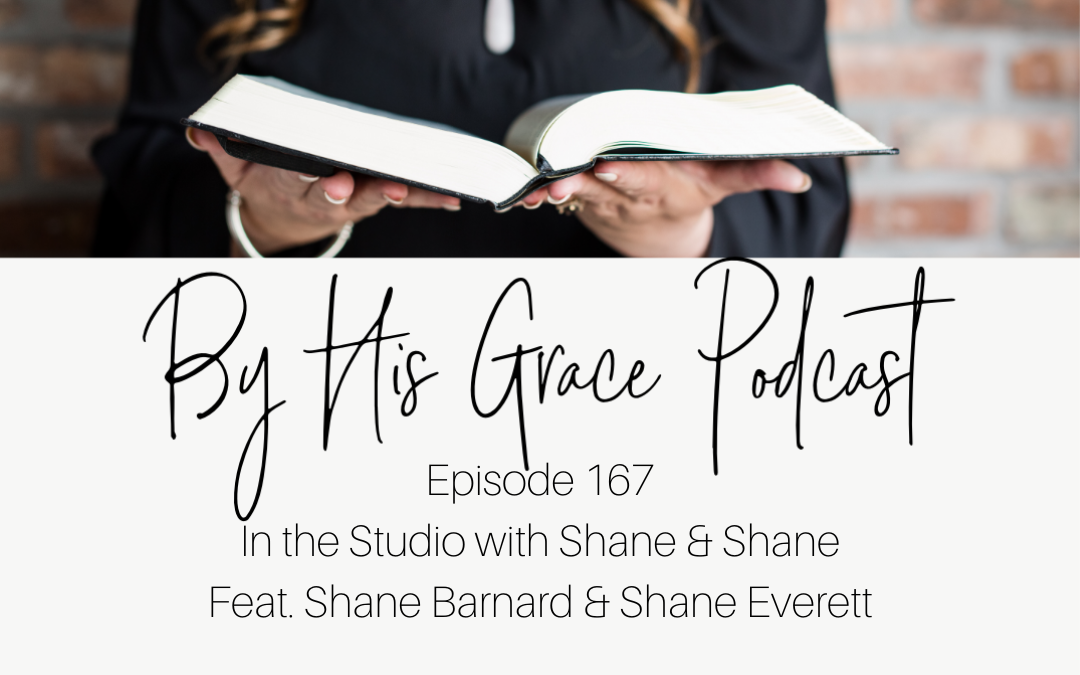 Misty Phillip sits down with musicians and worship leaders Shane and Shane in this two-part episode of the By His Grace podcast. Shane and Shane’s music has deeply affected Misty’s walk with the Lord. It was a huge treat to sit down with them in their studio in Dallas earlier this year to record the stories behind their worship music. The band consists of Shane Barnard (vocals, acoustic guitar) and Shane Everett (vocals). We go behind the music to discuss their upbringings, testimonies, and how faith has impacted their journey.

Shane Barnard talks about growing up on the West coast with a wild gold-digging adventurous cowboy with a gold pan and a gun. His mom was catholic, and they occasionally attended church. They migrate from California to Texas. In the eighth grade, he was on the roof of his house in West Texas, where the stars filled the sky. He looked up and encountered God, who captivated his heart. Shane compares the experience to Psalm 8.

Upon sneaking into a Bible church to play basketball, he heard it’s a simple gospel that God loves him regardless of what he’d done and that he could be forgiven where he gave his life to the Lord. One day he picked up a guitar and began leading small groups singing and praying to God. Shane’s entire family came to Christ. After years of sharing the gospel, at 65 years old, the scales fell off his Father’s eyes, and he became a believer.

Shane Everitt is Texas, born and bred. His Grandfather was a very religious deacon in a Baptist church, and his Father rebelled. Shane grew up with a Father in rebellion, but his Grandfather always made him go to summer camp each year. Every year Shane got baptized but never had a saving knowledge of Jesus. He grew up around the church, but it wasn’t until college that he had a transforming relationship with Jesus. He learned he could sing by joining the choir to fulfill a needed art credit.

The Shane’s met in college at Texas A&M. Everritt sang in bars throughout college to make ends meet. One night he was sitting at the end of the stage waiting to be paid when the lights came on. Under the neon, it looked one way, but when the lights came on, the reality of the bar was illuminated. The Lord used this image to reveal the condition of his heart, and Shane began weeping uncontrollably. The next day, he went to church, where he gave his life to Christ and was radically transformed. The following Sunday, he sang in the choir; the rest was history.

We discuss the creative process and how they’ve defined their roles. Barnard turned to the psalms to be a balm for his soul. Everitt does the management and business side.

“O Lord, our Lord, how majestic is your name in all the earth!

You have set your glory above the heavens. Out of the mouth of babies and infants, you have established strength because of your foes, to still the enemy and the avenger. When I look at your heavens, the work of your fingers, the moon, and the stars, which you have set in place, what is man that you are mindful of him, and the son of man that you care for him? Yet you have made him a little lower than the heavenly beings and crowned him with glory and honor. You have given him dominion over the works of your hands; you have put all things under his feet, all sheep and oxen, and also the beasts of the field, the birds of the heavens, and the fish of the sea, whatever passes along the paths of the seas. O Lord, our Lord, how majestic is your name in all the earth!” – Psalm 8 ESV

Frances Jane van Alstyne Crosby was born on March 24, 1820, and died on February 12, 1915. More commonly known as Fanny J. Crosby, she was an American mission worker, poet, lyricist, and composer. She was a prolific hymnist, writing more than 8,000 hymns and songs.

Connect with Shane and Shane