The Harmon Brothers on Entrepreneurship 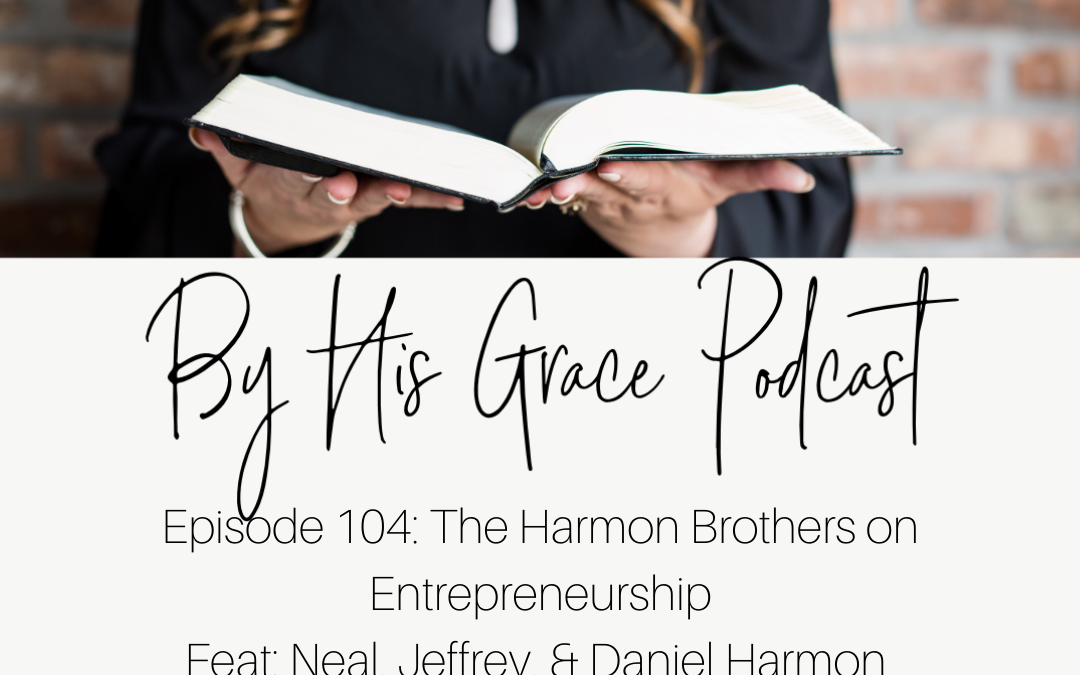 In this episode of By His Grace, I interview three of the Harmon Brothers. We had a powerful discussion on God and business. They shared insight into the strategy that helps them to work together as brothers, where they find their value and success, and how to handle failures in business and in life.

VidAngel Co-Founders Neal and Jeffrey Harmon discuss success with their projects Dry Bar Comedy and The Chosen, the largest crowd-funded television series in history. There new global brand Angel Studios is crowdfunding a film studio platform that helps creators come together with viewers to create high-quality TV and film without Hollywood.

Harmon Brothers are the Provo, Utah-based ad agency behind the greatest viral ad in internet history. Since 2013, the company has created numerous groundbreaking, distinctive social media spots, which collectively have over 1.3 billion views and have helped their clients to sell over $350 Million in products and services.

Connect with the Harmon Brothers on Social Media!

Jeffrey Harmon is the Chief Content Officer at Angel Studios, the new platform for community-backed film making. In this role, Harmon has led the development of the hit series The Chosen as well as Dry Bar Comedy and will work to help creators with more than 300 new projects over the next five years. He was co-founder of VidAngel, a streaming platform empowering parents to remove distasteful elements from movies and TV shows streamed on Netflix, Amazon, and HBO on Prime, and also a co-founder at Harmon Brothers, one of the world’s leading creative advertising agencies known for hit campaigns like Squatty Potty, Chatbooks, Lume, and Purple.

While still a student at BYU, Harmon earned a reputation as an early digital marketing pioneer when he emerged as the primary architect of a YouTube campaign advertising a product called Orabrush. With more than 50 million views, that campaign was ranked in the top ten social media campaigns of all time and catapulted the Orabrush Tongue Cleaner from zero retail presence to being stocked on shelves in more than 30,000 stores in 15 countries, proving that products could be marketed digitally to consumers.

Daniel Harmon is Co-Founder and Chief Creative Officer of Harmon Brothers, a Provo, Utah-based ad agency behind the most viral ads in internet history. Under Harmon’s creative direction, the agency’s groundbreaking ads have collectively driven more than 1 billion views and over $350 million in sales.

While receiving his degree in Advertising, Harmon learned from his door-to-door sales job that the key to successful salesmanship was truly believing in the product. Harmon then started his ad career as a copywriter at DDB Chicago and VSA Partners where he worked on campaigns for global brands such as McDonald’s, Dell, Caterpillar, Harley-Davidson, Avery Dennison, and GE Healthcare. Following this, he transitioned from business to business sales manager for an interstate battery franchise, where Harmon learned how to develop and nurture long-term relationships with customers.

But it was his work on a breakout campaign for Orabrush that paved the way for the definitive work that would follow. In 2013 as a co-founder of Harmon Brothers, he helped write and creatively direct a campaign for Poo~Pourri that revolutionized the way products are marketed. Harmon Brothers have produced internet advertising blockbusters such as Squatty Potty, Purple, Chatbooks, FiberFix, and Poo~Pourri.

Neal Harmon is CEO and co-founder at VidAngel. Prior to VidAngel, Neal served as Co-founder, COO, and Board Member at Orabrush as well as co-founder at Harmon Brothers, a marketing services company responsible for a variety of viral ads, for clients such as PooPourri and Squatty Potty.

As CEO of VidAngel, Neal has led the company through a variety of challenges and successes, including major lawsuits from Hollywood studios, bankruptcy, the development of VidAngel Studios, the creation of Dry Bar Comedy, and distribution and growth of The Chosen.

Neal is proficient in 10 computer programming languages and has a bachelor’s degree in American Studies and a master’s degree in Instructional Psychology and Technology.

Thank you for listening to the By His Grace podcast today! Be sure to subscribe so you don’t miss an episode. Sharing is caring and we’d love for you to leave us a review.