In the Studio with Shane & Shane Part 2 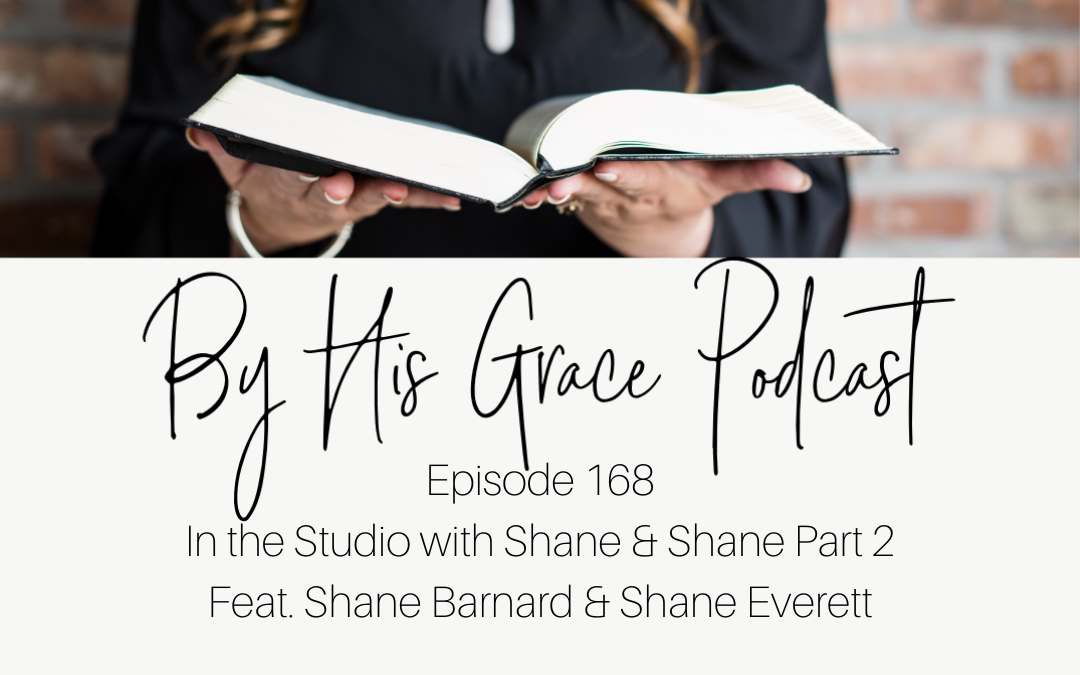 Misty Phillip sits down with musicians and worship leaders Shane and Shane in this two-part episode of the By His Grace podcast. Shane and Shane’s music has deeply affected Misty’s walk with the Lord. It was a huge treat to sit down with them in their studio in Dallas earlier this year to record the stories behind their worship music. In this episode we discuss the Worship Initiative, a subscription-based membership community to equip the church, and it’s musicians. We talk about faith and obedience.

“When we when we originally started the Worship Initiative we just wanted to equip the church.”

“Doing a songwriting class with a small university down on the south side of town here for a few years and I think in that process we kind a realized there’s a there’s a pretty deep need.”

“The younger generation in the church we’re pretty scripturally illiterate and so I think that was kind of a burden for us.”

“We wrapped the songs in scripture we write devotionals.”

“We wanted to see people love the Lord.”

“Take the vocation of of leading songs serious. Like to try  and put that the weight of the mantle of the position on the shoulders of people. We don’t need song leaders we need pastors to put put language teach people how to pray through song, and that’s really what we’ll do you wanna do now. We want the body to be healthy.”

“We want the word of Christ to dwell richly in the bride.”

Psalm 2 “It is such a good reminder every time you know that the Lord is our shepherd and we don’t have to want.”

“I’ve been singing a song that we it’s always kind of the newest songs because I was your favorite but you can’t really get this on Spotify we just released a video on YouTube it’s a song and I wrote kind of with the with the church of the Ukraine in mind about fighting a battle that gods already won. We don’t know what you’re doing but we know what you’ve done”

What is the Lord speaking to you?

“My purpose is a person, and His name is Jesus.”

“Being faithful is what He wants us to do.”

“It is at just living a life of faithfulness tday by day versus finding my value and the pursuit of this or that. All of those things are real but they’re just real bad gods, not necessarily wrong, but they don’t save you or anyone else.”

“In God’s billions of thoughts and all the billions of things he’s orchestrating it one moment the best way for me to glorify God may look like that.”

“Okay you’re gonna go hard for a few years and you’re gonna be upside down cross and that’s the best way for me to get glory, but it’s not just got to get the glory, but that’s it for your ultimate joy.”

“Trust in a good God and that’s why it’s it’s okay and just lean into the thought that God‘s in control and he is good. ”

“it’s all where we find our value, you know, it’s like and if my value in my worth is found in Jesus I am completely free to lay down my life with no expectation of return.”

“Let the word of Christ dwell in you richly, teaching and admonishing one another in all wisdom, singing psalms and hymns and spiritual songs, with thankfulness in your hearts to God”. – Colossians 3:16 ESV

21 After this Jesus revealed himself again to the disciples by the Sea of Tiberias, and he revealed himself in this way. 2 Simon Peter, Thomas (called the Twin), Nathanael of Cana in Galilee, the sons of Zebedee, and two others of his disciples were together. 3 Simon Peter said to them, “I am going fishing.” They said to him, “We will go with you.” They went out and got into the boat, but that night they caught nothing.

4 Just as day was breaking, Jesus stood on the shore; yet the disciples did not know that it was Jesus. 5 Jesus said to them, “Children, do you have any fish?” They answered him, “No.” 6 He said to them, “Cast the net on the right side of the boat, and you will find some.” So they cast it, and now they were not able to haul it in, because of the quantity of fish. 7 That disciple whom Jesus loved therefore said to Peter, “It is the Lord!” When Simon Peter heard that it was the Lord, he put on his outer garment, for he was stripped for work, and threw himself into the sea. 8 The other disciples came in the boat, dragging the net full of fish, for they were not far from the land, but about a hundred yards[a] off.

9 When they got out on land, they saw a charcoal fire in place, with fish laid out on it, and bread. 10 Jesus said to them, “Bring some of the fish that you have just caught.” 11 So Simon Peter went aboard and hauled the net ashore, full of large fish, 153 of them. And although there were so many, the net was not torn. 12 Jesus said to them, “Come and have breakfast.” Now none of the disciples dared ask him, “Who are you?” They knew it was the Lord. 13 Jesus came and took the bread and gave it to them, and so with the fish. 14 This was now the third time that Jesus was revealed to the disciples after he was raised from the dead.

Jesus and the Beloved Apostle

25 Now there are also many other things that Jesus did. Were every one of them to be written, I suppose that the world itself could not contain the books that would be written.

Worship in the Word

Connect with Shane and Shane